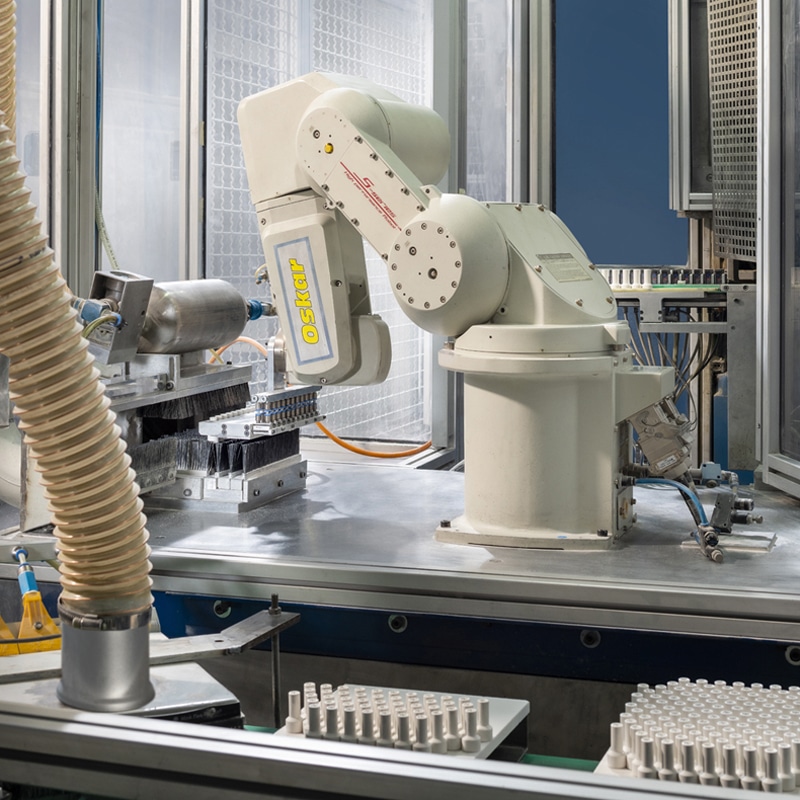 The degree of automation at Sembach Technical Ceramics is high. Fully automatic production islands produce around 600 million technical ceramic components every year. Robots from Mitsubishi Electric have been used for ten years now. On the occasion of the “Robot Anniversary”, CEO Martin Sembach explains the significance of automation and robotization for the production of Technical Ceramics.

Mr. Sembach, you have been using Mitsubishi Electric robots in your production for ten years. How did that happen?

Without robots, the scale of what we are now producing would not be possible. The activities performed by the robots are no longer conceivable for human hands. With 600 million parts produced each year at Sembach, manual movement of each small part is impossible. Our first robot was used in dry pressing. The task was to pick up parts that came from the press, fettle them and place them on a firing batt, in such a way that many parts are placed in close proximity to one another. Only our new electronic employee “Oskar”, named after our company founder, was able to do that.

Did I hear that correctly, your first robot was called Oskar? How did you come up with the idea of naming your robots?

You heard me correctly. Each of our robots has received a name from the Sembach ancestral portrait gallery. To us, the robots are also “employees”. They make a decisive contribution to the production output and deserve a name. We are only slowly running out of Sembach history after 26 deployed robots; Meanwhile, the younger family members are already represented. Currently there is a new robot island under construction, to be called “Valentin” after my cousin’s son.

Is there a robot called Martin and where is it used?

Of course! My double in production is responsible for sorting out kiln furniture into a pile.

Why did you choose robots from Mitsubishi Electric?

Our first robot was to be as small and maneuverable as possible and be able to carry out tricky rotations in the smallest of spaces. The imposing robots used in other industries would have been too big. At Mitsubishi Electric we found a very good price-performance ratio. In addition, we appreciate the personal attention there. Our contact person is always available and supports us at any time with questions, e.g. for programming. If we need replacement, it is quick and easy, so we do not have to interrupt our production for long.

How did the employees react ten years ago when you wanted to introduce robots to perform activities faster and more efficiently?

At first, some employees expressed reservations as to whether this measure made any sense at all. But they were quickly able to see, how the use of a robot made life easier for the employees, too. In fact, the robots take on stupid and physically demanding and detrimental activities that our employees no longer want to carry out today! The tasks for our employees, on the other hand, have become more challenging. One employee now operates up to five machines and has to be familiar with the programming of the machines, quality controls and preventive maintenance.

Were employees replaced by robots?

No, the employees were not replaced, but certain activities are now performed by robots. Our headcount has been relatively constant in recent years at about 250 people; but with significantly increasing sales. It was never about to cutting staff, but rather to make the processes easier, including for the employees. And instead, new, more challenging jobs have been created. Of course, there are also employees who cannot identify with the progress of automation and robotization. But even here we have enough tasks, which still require 100% from a person. These relate to new orders in particular, when the quantities are still small.

You mentioned the keyword automation. The automation level of your company is quite high; both in comparison with the industry and with other companies of your size. And you invested early in automation measures – as early as the 1970s, is that correct?

Those were the fettling machines with which we started the automation process. When the parts came out of the press, they were linearly indexed and deburred with small brushes and blades. This ran automatically. Afterwards, however, the parts had to be laid by hand on the firing shelf and these firing shelves had to be stacked up. Nowadays, only robots undertake this process. A little time has passed from the beginnings of automation to the first robot. However, we have also automated in other ways. Although we do not have assembly lines, we do have many smaller production islands where about 70 different items are produced fully automatically at the same time. In addition, the 100% inspection, i.e. the optical inspection with camera systems, has been automated. Here, we have built up a great deal of experience and now also manufacture the optical test systems completely independently.

Describe how such a robot in the dry pressing area works exactly.

Take Eberhard as an example. When we set up a new product, the part is first manufactured in the shaping machine, in this case the press. In the next step, the robot takes the part and carries out further work, e.g. deburring, cleaning or blowing out. Finally, the robot places the parts on the firing shelf made of silicon carbide (this is temperature-resistant up to 1,600°C). Another robot (Martin) comes and picks up the batt and puts it on a pile. Previously, this robot also had to place spacers so that the batts supported each other.

Are there any other areas where robots are used?

Actually, the robots support us in the entire manufacturing process, including in injection molding, assembly and packaging. The advantage of the robots is that they are freely programmable. If something changes on the component, only the programming has to be adapted and the production continues. Another example from the field of packaging: We produce a temperature limiter for glass ceramic stoves, which has to be put into the packaging in a very specific way for the customer, since the customer wants to remove the parts in this position and immediately process them. This filling of individual parts from the firing shelf into packaging by hand is much too complicated. Walter, on the other hand, can take all temperature limiters at once, i.e. approx. 30 pieces, and insert them into the box. That corresponds to a performance improvement of 300%.

The use of robots and automation have ultimately helped you increase your production volume?

Of course, both are crucial factors. 600 million parts a year is not peanuts when compared with the whole industry. Sembach is known for producing large quantities. That’s why we are in great demand in the automotive sector.

The demands on suppliers in the automotive industry are very high.

That’s right. Above all, the cost pressure in the industry is immense. Roughly speaking, our ceramic parts must be absolutely filigree, precise and 100% intact, but less expensive than a gummy bear. However, if I were to deliver the quality of a deformed gummy bear, any business relationship would be over immediately. When I brought this comparison up once in a contract negotiation, I was gifted gummy bears in the second round!

Fun aside: thanks to our continuous process optimization, we have always been able to meet the requirements of the automotive industry. This is proven not least by our certification according to the automotive-specific quality management standard IATF 16949.

Mr. Sembach, how is the journey continuing, what automation steps are you planning?

Currently, 26 robots from Mitsubishi Electric are in use, and two more robot-assisted production islands are under construction. An important secondary aspect of automation is the extraction of data from the production process. We already have excellent traceability from the end product to the starting material. All operations are booked precisely and are transparent. Another consideration is the machine connection with regard to preventive maintenance. This means that malfunctions can be predicted even better and be avoided.

As a further step in the automation process, I also see automated transport systems that bring the stacks of loaded firing batts to the interim storage before they are pushed into the furnace. At the moment, however, this is not yet possible due to a lack of space in the production hall. But we are working on it!