A wise and future-oriented decision 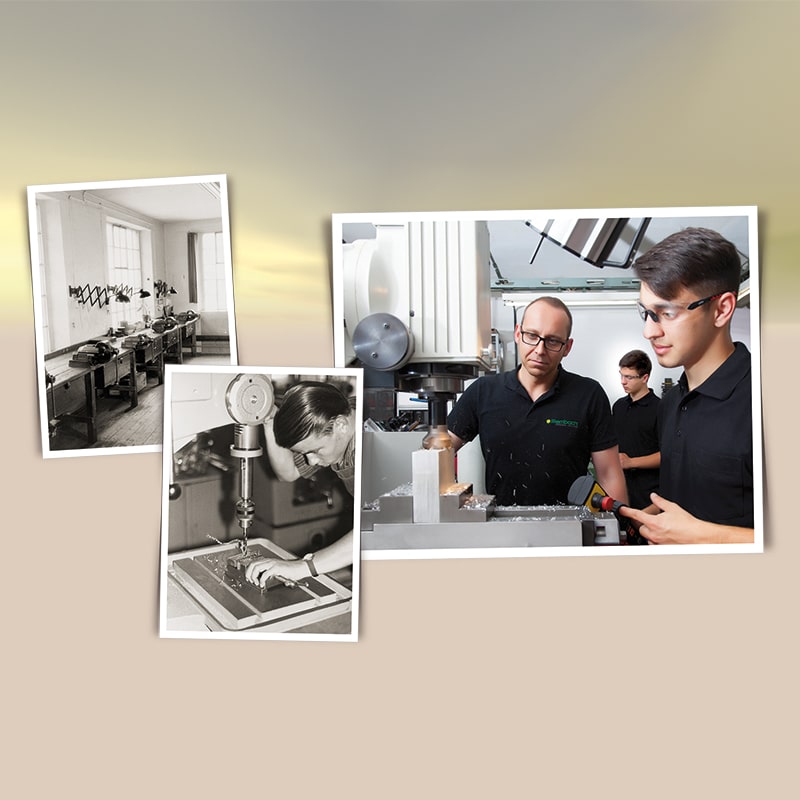 Lauf an der Pegnitz is the center of the German steatite industry. No other place in the country attracts more manufacturers of technical ceramics. Oskar Sembach, born in Thuringia, played a major role in this development in 1904 by founding the “Speckstein Steatit Gesellschaft m.b.H.” in the small Franconian town. The medium-sized family-owned company celebrated its 111-year anniversary last year. In 2016, the company had good reason to look back on a training workshop that was established 50 years ago in 1966.

Sembach has been taking on trainees since the 1950s. Right from the beginning, more than 260 young people have undergone industrial training with the company as toolmakers, mechanics and shop mechanics. Today, the company trains only industrial mechanics and, since 2004, machine and plant operators. In the past, six to seven young business trainees were employed every year. However, Sembach changed this strategy in the 1990s. Instead of training more people than actually required, the company decided to offer immediate long-term prospects to junior employees. The same strategy was also valid for design draftsmen (today they are called product designers) who were trained only as required.

Walter Waitz started training as a toolmaker on September 1, 1968 and attended the very first Sembach training workshop. “Setting up the workshop was a wise and future-oriented decision”, says the 62-year old Head of Final Control & Testing who will retire in August. “There was no other way to find experts for the future”. During the first half-year, trainees spent most of their time working at a vise learning how to use the file from scratch. During the second half-year, they were trained to use machine tools. “Second half-year training was already adapted to the company’s needs”, remembers Waitz. “We were very busy and our work served the entire plant”. In the second and third year each trainee was assigned a personal instructor or trainer. Back then, the trainee’s eight-hour working day also included getting snacks for other employees. “Once a month at our Saturday manual training classes, we were taught how to make technical drawings. However, in spite of all the other tasks we had to take care of, we all like to remember this time”, says Walter Waitz.

Most of the strenuous handwork has been replaced by high-quality machines. However, these machines have to be run by trained operators who require extensive knowledge of related software. Today, a machinist-to-be must know about robotics as well as controlling and electrical engineering. During the training, Sembach junior employees spend time in different departments, automation and maintenance, tool design and construction, production and quality assurance. They gain hands-on experience in handling technically complex machinery and plants.

During the course of the training, the trainees acquire practical fundamental expertise such as marking-out, filing, measuring as well as turning, cutting and drilling. Each subject area is supplemented by preparatory theoretical classes in materials science or occupational safety. Practical projects provide competences in such areas as planning, implementing and controlling relevant for the examination. A computerized pneumatic course in theory and practice using simulation programs is scheduled at the end of the first year of training. Servicing and maintenance are taught from the second year onwards, further principles of automation technology are part of the training schedule later on.

“Those who are trained at Sembach today are soon ready to accept responsibility,” says Head of Human Resources Andrea Doms. “Our trainees are involved in day-to-day business early on in their apprenticeship. They are given intensive supervision, allowing them to put their knowledge into practice very quickly. At Sembach, the entire plant is the training workshop”, she says.

“We attach great importance to getting young people involved in our industry and ensuring their loyalty to the company”, Doms says when asked about the importance of supporting young trainees. “We are primarily interested in training them for us because on the free market it is very difficult to find qualified skilled workers with ceramic background.” Today, many young people prefer schooling to manual training. They have their eyes set on high-school diplomas or even degree courses and look for suitable jobs in administration or management and service industry. Technically interested applicants are often not sufficiently qualified in subjects such as mathematics or physics which are relevant for the apprenticeship. And there are many other attractive companies in Lauf looking for trainees. In comparison, however, the number of potential applicants is relatively small.

After completion of their training period, Sembach GmbH & Co. KG employs an average of 80 percent of its trainees and hires six new trainees each year, which allows us to “respond specifically to the needs of the individual”, says Andrea Doms. “At Sembach, you are not just a figure, but you are treated as a colleague right from the start”, she adds. “We have a very family-like atmosphere at the workplace.” Six new trainees will start training at Sembach Technical Ceramics in September 2016, four young men and two young ladies.

After having gone through a selection procedure, trainees may look forward to attractive job opportunities: “There is always a demand for skilled workers. Currently, their prospects are really good”, says Andrea Doms. “You can develop your career, take further training, manage a team or even a department later or become a specialist in a particular field such as eroding or CNC or PLC programming.”